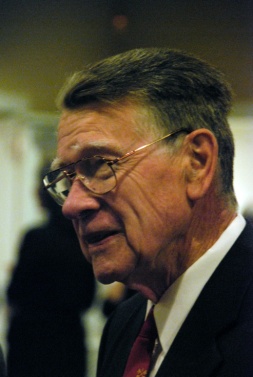 John was born in Norwalk, Connecticut to the late Carl F. and Gertrude (Lord) Schmitt. Upon return from service in the U.S. Navy, John obtained his B.A. and Master of Arts in Teaching History from Harvard and began his career as an educator. He taught in several schools including Millbrook School and Colorado Rocky Mountain School before founding Thomas More School in Harrisville, New Hampshire, serving as its Headmaster until it closed in 1971.

From 1974-1979 he served on the faculty of Thomas Aquinas College in Santa Paula, California. In 1979 Mr. & Mrs. Schmitt founded Trivium School in Lancaster. John has served as Headmaster until 2000 and as President and Chairman of the Board of Trustees until 2011. Throughout his distinguished career, Mr. Schmitt was dedicated in faith to providing a classical Catholic education to young men and women. He was a devoted husband, father, and grandfather who most cherished time spent in the company of his loving family.

A Mass of Christian Burial will be celebrated at St. John the Evangelist Church, 80 Union St., Clinton, on Saturday, August 25 at 10 am, followed immediately by burial at St. John’s Cemetery in Lancaster. Visiting hours are from 5 to 8 pm on Friday, August 24, at Trivium School, 471 Langen Rd., Lancaster. Memorial contributions may be made in memory of John S. Schmitt to Trivium School.