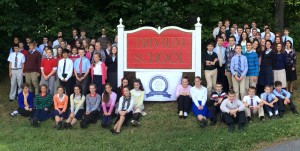 Trivium School, founded in 1979, is Catholic, co-educational, day school. It focuses on the liberal arts as a way to give students the essential tools that they need to achieve excellence. The Bishop of Worcester, Robert McManus said, “At this school, you have been taught to become not only knowledgeable but more importantly, to become wise.” Trivium School Headmaster, Dr. William Schmitt stated, “This honor is for the whole community: students, faculty, and parents – but also for our diocese and our home towns. As Saint Paul says, ‘if one is honored, all rejoice together.'”

“Since the competition began in 2004, the Honor Roll has been a helpful tool for administrators, families, and benefactors in recognizing the quality of a Catholic high school,” said Patrick J. Reilly, President of The Cardinal Newman Society. “The Honor Roll schools are a reminder that Catholic education is getting better every day – not only academically, but in the renewal of Catholic identity – and we are delighted to see the increased level of competition among the schools that participated in the program this year.”

This year’s Honor Roll schools are diverse: large and small, new and long-established, both highly selective and open enrollment admissions policies, and high and low tuition rates. The common trait is an institutional commitment to providing a truly integrated and faithful Catholic education across all disciplines and in all areas of student activities.

The Catholic High School Honor Roll was created by The Acton Institute in 2004. The Cardinal Newman Society, based in Manassas, Virginia, assumed the program, consistent with its mission of helping Catholic families and promoting faithful Catholic education.